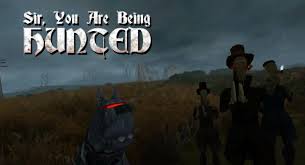 My boyfriend Jaco likes talking to himself when he’s playing video games. I’ve been meaning to do this for ages – here’s a transcription of him playing Sir, You Are Being Hunted! this evening.

I think I now have all the good things in my equipment that one needs from day to day. Survival on these here isle-lands.

Oy. I’m SO in the long grass here.

Better move. Ooh, a stick of dynamite! I LIKE that. I better run away, though.

Ach… I ate my haggis.

Wish there were a fire nearby that I could light… That would be spectacular. Maybe there is, ober da haus.

So.. Use the stick of dynamite as a distraction, or use it to try to blow some of those dudes up? That’s the question! I wonder where my choo choo train is…

Oh it’s a little one! Run away, run away! When I panic I push the wrong buttons… Oh fuck! That’s not good. There’s a horse dude over there.

… THAT’s not what it sounds like when you hit a rabbit with an axe!!

Now I’m gonna go pick a fight with some robots cuz I feel like it. One, two, three, four five six seven eight nine… maybe it’s too many. But really, it’s only suicide for funzies ’cause I’ve now finished playing.
(gunshots)
I’ve killed two of ’em! Three four… I killed four of ’em before they got me! Very gooooooood.